is a Vancouver-based artist who works in a variety of media including books, sound, embroidery, sculpture, film and video. Her work is often based in text and draws primarily from popular culture, literature, and art history.

She works collaboratively with artist/musician Brady Cranfield on two projects,

with artists to talk about, listen to, or perform music, and as Cranfield and Slade,

who have released two concept albums 12 Sun Songs (2009, published by the

(2011, published by The Presentation House Gallery in North Vancouver).

Slade is the founder of READ Books, an ongoing art bookstore project of the

Charles H. Scott Gallery in Vancouver, and is the founding editor of the Emily

Carr University Press. She also edits Slade Editions, a series of books with

She has exhibited in Canada, the United States, China, Europe, and the United

Kingdom. Her work has most recently been exhibited at the Audain Gallery in

Gallery (BC), Museum London (ON), Heidelberg Kunstverein, the Vancouver Art

in Dublin. In 2009 Slade received the Jack and Doris Shadbolt Foundation VIVA 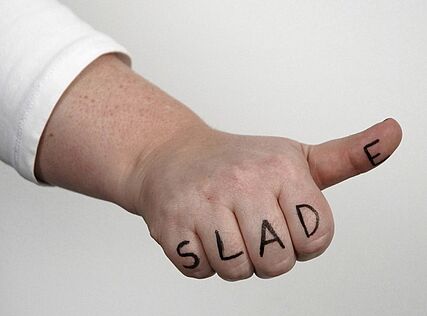