Wormhole Stories” is a multimedia performance by Maggessi/Morusiewicz, who present a slew of stories of draining frustration and of never-ending pleasure, inspired by films and their own daydreaming(s). Some of the stories originate within various wormholes, while some others resemble wormholes through their spiral shapes, or they evoke wormholes through the use of light, sound, and material objects. Some of the stories share protagonists, themes, and moods, mushrooming from and converging into one another. Some appear as strange encounters to others, bouncing off of them like spaceships that lose control of their peripheral vision, while they are about to set out on a scarily unpredictable trip through a black hole. What all the stories have in common is time: expanding, sprawling, and rhizomatic. Their time is one of a detour, of a meantime, and of a process. This time slows down and pauses at what may pass unnoticed on the way towards a climactic final destination.

“Wormhole Stories” are crowded with protagonists, some of them non-human. One of the latter is a screen that, through the use of colorful textile, queers the idea of a cinema screen: white, placed front and center, surrounded by darkness. There’s a phone and a microphone. There’s a yoga-ball that is in its own wormhole of becoming a spaceship. There’s a poem-long T-shirt, repeatedly taken off someone’s back during a sexual hook-up, and revealing, inch by inch, a wealth of visual information about the lover’s body. There are take-away pizzas, used to being discarded upon arriving at their destinations: such pizzas come from gay adult films, where they are a narrative trope and a never-to-be-eaten meal, ordered by men whose voracious appetites don’t focus on food and delivered by other men who aren’t in a hurry to swiftly return to their workplace where they would pick up another order. All of the protagonists are entangled in a post-cinematic performative relationship, one that distills and expands kernels of multiple films and remixes them into new or newly revisited characters, phrases, scenes, and dreams. 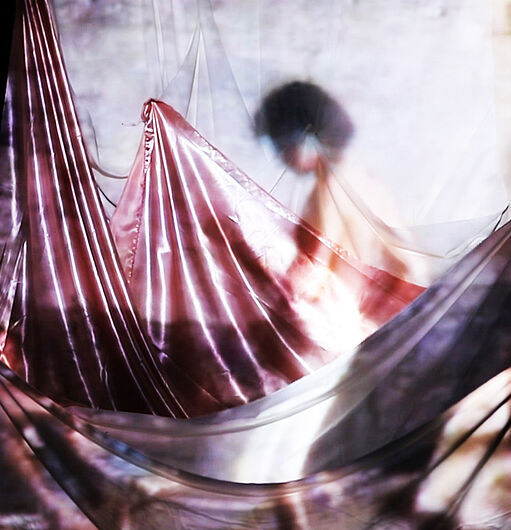 Guilherme Maggessi and Rafał Morusiewicz are a Vienna-based artistic duo, who research, curate, make films, perform, and art-work together. They are invested in working towards a sustainable collaborative artistic-research practice that is situated “in-the-meantime” and are interested in fabulating and working towards “pleasant queer futures.” By employing tools stemming from their different backgrounds, such as design, found-footage film, sampling, and analog techniques (stitching and silkscreening), Maggessi/Morusiewicz explore forms of creating archives and fabulating futures in expanded and intimate ways.

The duo has collaborated for over two years, focusing especially on connecting with artists and institutions in and around Vienna. Their first project was curating the exhibition The Poiesis of Composting at the Academy of Fine Arts Vienna’s Exhibit Eschenbachgasse (2021-2022). Within this context, they held a lecture performance at Volkstheater (THE NEW NORMAL Festival, 2021) and curated a screening at Blickle Kino (Edit Affects, January 2022). Their performance at WUK is the latest episode in their ongoing project In the Meantime of a Wormhole, the iterations of which have been shown in institutions, such as Kunstraum Lakeside (Duration Trouble, Nov 2021), Bears in the Park (To Mean Time, Feb 2022; Flash/Dim, Mar 2022 as part of Handle With Care @ imagetanz festival), and VBKÖ (In the Meantime of a Wormhole, Apr-May 2022). Starting in October 2022, Maggessi/Morusiewicz will lead an FWF | PEEK artistic research project, “W/ri/gh/ting Archives through Artistic Research,” at the Institute for Art Theory and Cultural Studies at the Academy of Fine Arts Vienna.