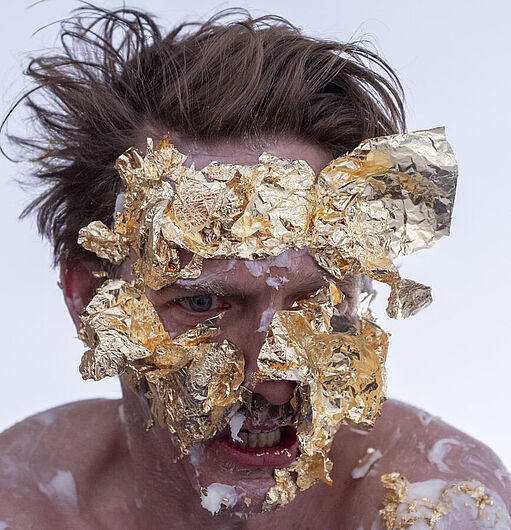 Steffi Wieser Born in 1982, lives and works in dance, performance, choreography and concept development in Vienna. Recent projects as a performer at Saint Genet: Flinch not and give not back at WUK and Promised Ends- the slow arrow of sorrow and madness 2017 and SIGNA: Wir Hunde / Us dogs at Wiener Festwochen in 2016, rewarded with the Nestroy Theater Award. Her own choreographic work was chosen for residencies and festivals at Im_flieger, Crossbreedsfestival, nadaLokal, Festspielhaus St.Pölten, Dimanche Rouge Paris, Page not found Brooklyn, Festival de Solos Lissabon. She studied classical and contemporary dance at the conservatory in Vienna, with a scholarship from the BKA at the CNSMD Lyon / FR and with an Erasmus scholarship from the BKA at the Escola Superior de Danca Lisbon / PT. In 2011 she got a start scholarship from the BKA for her own works and in 2012 the DanceWeb scholarship at Impulstanz. Since 2009 she has been developing concepts, curating, organizing and supervising events at Tanztag 09-11, Im_flieger and DAS PACKHAUS.

Brian Lawlor is a composer/multi-instrumentalist/conductor living in Jersey City, NJ.  After skipping a year of high school, he subsequently finished his college degree in 3 years. He received a B.M. in Composition from Cornish College of the Arts, an M.M. from SUNY Purchase, and studied at the Royal Conservatory of Music (Koninklijk Conservatiorium) in Den Haag, Netherlands. Mr. Lawlor has received grants from Jack Straw Productions, Atlantic Center for the Arts, and his music has been performed throughout North America, Europe and China.

Marilies Jagsch Born in 1984 in Linz, lives in Vienna, has studied theater, film and media studies and works as a musician. In 2008, she released her debut "Obituary for a Lost Mind" and 2010 album "From Ice to Water to Nothing" on the label founded by Clara Luzia Asinella Records. Away from her solo projects, she has worked together with the electropop icon Bernhard Fleischmann and was a guest performer, among other things, for A  Life, A Song, A Cigarette, Love & Fist, Ken Stringfellow (REM, The Posies), Ernst Molden and Wolfgang Frisch (Sofa Surfers) . Currently, the artist sings in the band Vienna Rest in Peace and collaborats with the performance group Saint Genet.

Julia Konvicka (Pichler) Born 1986, raised in a small town in Lower Austria. Started to play the violin at the age of 6 and playing ever since. Moved to Vienna to study violin and violin education at the University of Music. Finished her masters degree in 2012. She works as a freelance musician and violin teacher in Vienna and Lower Austria. Julia has a broad variety of musical influences and styles, playing in various formations with emphasis on chamber music. In 2010 Julia was one of the musicians in residence at the World EXPO Shanghai. She travelled the world with her violin. Right now she lives in Vienna with her little daughter and her husband.

Erin Jorgensen is a marimba player and musician living and working in Seattle, Washington, USA. Her love of the unique properties of the concert marimba began in drum corps followed by an academic study of classical percussion; leading to a diverse artistic life presenting performances in art spaces, theaters, concert halls, rock clubs, tattoo parlors, scene shops, car garages, and other unexpected spaces as well as a tour of the USA opening for indie band Built to Spill with guitarists Brett Netson and Jim Roth. Her musical style and interest ranges from Bach to electronica to movie soundtracks to pop covers. She does occasional projects with choreographers, theater makers, film directors, rock bands, and whoever else she finds interesting. Learn more at erinjorgensen.net

Emily Stewart Born in London in 1985, is a Vienna based violinist. Stewart enjoys experimenting with a wide range of styles, and has had the pleasure of working with a variety of musicians and groups across the musical spectrum. Her flexibility as a musician and her understanding of different genres have made her a sought after string player, especially in cross-over projects, as well as in theatre and interdisciplinary productions. Emily Stewart was awarded the START-Stipendium for Music and Performing Arts 2017 from the Austrian Federal Chancellery.

SCARABEUS DREAM (Bernd Supper and Hannes Moser)  Hannes Moser and Bernd Supper extract from the narrow cast of drums, piano and hysterical vocals are rituals of musical and unmusical noise, of corporeality and black theater, of free rock and chamber Zeuhl, of exaggerated soul-watching and devious attacks, lasting in tattoo the hearts of their listeners.

Casey Curran received his BFA in painting and sculpture from Cornish College of the arts in 2006. Since then he’s been involved in numerous gallery and museum exhibitions locally and nationally. He’s completed several large scale public works in partnership with Skanska Architects, Security Properties and Mad Art Seattle, was awarded the NY Sculpture Space residency twice, and has received awards in artistic merit from Artist Trust. In 2008 Curran become a key collaborator in the internationally recognized performance art group Saint Genet developing large scale interactive sets. He is currently represented at Roq La Rue Gallery creating his next series of work.

Lavinia Vago is a dance artist from Italy, based in Seattle, working between NYC, Montréal, Berlin and Vienna. She graduated Magna Cum Laude from Cornish College of the Arts. She has created, performed and toured internationally with Sidra Bell Dance New York, Vim Vigor Dance Theater, Loni Landon Projects, Tom Weinberger and more extensively with Montréal based Rubberbandance Group; She has been co-directing, creating, and performing with Kate Wallich/The YC since 2010 and is rehearsal director for YC2, since 2017. She recently collaborated and perfomed with Saint Genet at Wiener Festwochen (Vienna) and Holland Festival (Amsterdam) and is continuing this collaboration into the future.

Thomas Thalhammer is Mentalist, director and performance artist. He studied for his educational training in theater, film and media studies and took acting and singing lessons. He was artistic assistant at the Vienna Musical School. As a production assistant and dramaturge Thalhammer worked for the Opera Klosterneuburg. He quickly began their own productions. The arch stretches from the premiere of the chamber Sing game DAISYS KING in Munich on Aristophanes' WEIBER RIOT up to! FEAR! by Ursula Knoll in the jungle Vienna or Heiner Müller QUARTET and BODY WEIGHT. 17% by Ewald Palmetshofer. As Mentalist Thalhammer developed several solo programs that try to connect theater and mentalism. As a performance artist, he has worked in recent years strengthened with the Electro Project Two Pigs Under One Umbrella together and finally with Saint Genet at SHAPES LIKE IN DREAMS.

Aleksandra Cwen was born in Poland and currently living in Vienna, Austria. Aleksandra has worked in Poland, Germany, Austria and in Los Angeles. She has played in comedies, tragedies, horror, costume dramas and contemporary movies. As well as being involved in classic theatre productions, she has also worked in the alternative and fringe theatre scenes.Aleksandra has received numerous theatre and film awards for her performances. A leading role in the critically acclaimed film Hagazussa by director Lukas Feigelfeld brought her international recognition as well as a Best Actress award at the 34th Phenomena Festival in Brazil.

Hermes Phettberg is an Austrian artist, comedian, actor, author and talk show host. The first name of his nom de plume is taken from the ancient Greek god Hermes. The last name means "fat mountain", but is written as Phettberg instead of Fettberg as an ironic hint to his Greek-sounding first name.

Jordan Christianson is a costume designer based in Seattle. He designed pieces for Saint Genet’s “Frail Affinities” at donaufestival and “Promised Ends: The Slow Arrow of Sorrow and Madness”

Anna Telcs studied Humanities at Seattle University (BA, 1999), and received a BFA in Industrial Design (2003) at the University of Washington, graduating with honors and the recipient of three scholarship grants. Building a career focused around the intersections of fashion, art, and business, Anna has worked for independent and innovative fashion houses, including Thom Browne and Helmut Lang and London Fog.

Chiara Aprea is 19 and comes from Sorrento, Italy, where she started practicing dance as an hobby. Two years ago she moved to Roma to attend a professional dance programm called RIDA, which gave her a new awareness of the communicative possibilities such an art offers. Therefore she decided to continue on that way and she is currently studying at the Musik und Kunst Universität in Vienna.

Jeanne Lakits comes from Paris. There she learned ballet and contemporary dance such as Graham technique. When she was 18 years old she moved to Copenhagen in a dance school for one year. In 2017 she began to study dance at MUK in Vienna. The same year she also started an online bachelor program of physics at Sorbonne University.

Flora Boros was raised in a hungarian-german household  in Budapest.  She started with showdance and competed for several years, she was introduced to contemporary dance at Budapest Dance Theatre, where she trained with the company.  She is currently living in Vienna studying at the Universität Wien International Economics and at MUK Contemporary Dance.

Adela Maharani is originally from Indonesia. Currently she is studying dance in the Musik und Kunst Privatuniversität Vienna. She started dancing in Indonesia at an early age and before moving to Austria, she also did a dance education in France and in the Netherlands.