For their first work together, the choreographer and visual artist Elisabeth Bakambamba Tambwé proposed to the director Monika Gintersdorfer “Fragments d'un discours amoureux” by Roland Barthes as a starting point. This text, published in 1977, is a space for reflection on and a plea for the philosophy of passionate love.

Barthes divides different aspects of love into 'figures of thought', which create a text without underlying narrative, hierarchy or development; through alphabetical order, the sequences are juxtaposed, unrelated and of equal weight.

Love is an unknown situation in which one can get lost. People who constantly want to be in control of their lives will (avoid) passionate, desperate love. People who are afraid of falling, who want to manipulate everything like an object, will distance themselves from love. The lovers swim in the middle of a paradox, in a permanent distortion of time and space, where the presence and above all, the absence of the loved one become decisive for life. Here it is indeed this figure, the one that Barthes calls the figure of deprivation: the Absence.

A very simple dispositiv, close to a communication network. Where the performers, the installation of cords, the screen and the camera coexist on the same stage. This performance is in a way an attempt to critical exploration of our relation to the other.

We have never been so alone in front of the other

Elisabeth B. Tambwe about the performance "Speech of Love: Absence" 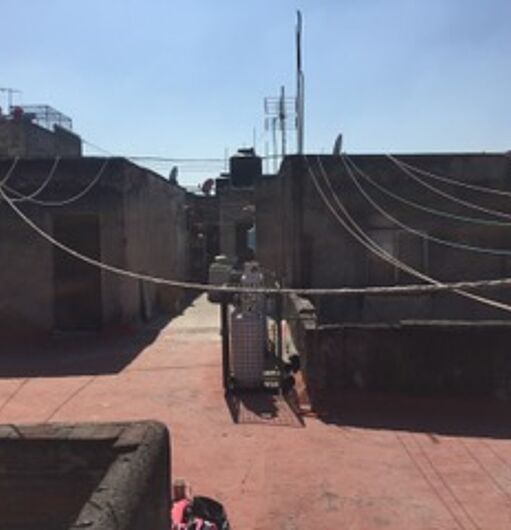 "Speech of Love: Absence" is by Elisabeth Bakambamba Tambwe in collaboration with Monika Gintersdorfer.

ELISABETH BAKAMBAMBA TAMBWE was born in Kinshasa and grew up in France, where she studied visual arts and sculpture. In her choreographic work, the artist deals with the sensitive and fragile dimension of the body and the concept of normality, which she criticises as tyrannical and degrading. Her most recent works have been shown at the Wiener Festwochen, steirischer herbst, brut Wien, donaufestival, ImPulsTanz and Afro_Vibes Amsterdam, among others.

MONIKA GINTERSDORFER born in 1967, is a theatre director. She focuses on performances in a transnational and transdisciplinary approach:  translation processes in language and movement play an important role in the team orientated work. She has founded and has been working with the theatre and dance groups Gintersdorfer/Klaßen (2005) and La Fleur (2016), mainly between Germany, Ivory Coast, Mexico and France.  In their work they try to be conscious of the context they work in and change it quite often: from theater to the club to the gallery to urban spaces. There are no plays that are made to last for a long time, they work in series that continue: showbiz, religion, politics and their links to each other have been mayor topics. The participating artists should know how to exploit the work for themselves in various ways as they all work in multiple contexts. She is member of the academy of the arts of the world in Cologne since 2013. She lives in Berlin.

LUCA BONAMORE (he/him) is a dancer, choreographer, performance artist as well as dance educator. He has been living in Vienna for 12 years and is originally from Rome. In the independent scene he performs mainly under the pseudonym "Pornamore". In collaborations he worked on Kimbar: A queer protest, SBS320. and super-entangled for the Garage Grande as well as Fugue:Four Response in the Museumsquartier, which will be shown at the Volkstheater Wien at the end of the year. Furthermore he performed in productions of the Jungle, Max-Reinhardt-Seminar, KunstHaus Wien, Booth 129, MUK Theater as well as Unicorn Art - Association for Dance Theater. Currently he is studying contemporary Dance Pedagogy at the Music and Art Private University of the City of Vienna. He is interested in the interface and connection of different arts as well as the examination of gender/roles/expression.

ANNICK CHOCO Badekou Annick Prisca Agbadou aka ANNICK CHOCO is an Ivorian dancer and singer. Before starting her solo career in the music style Couper Decaler, she danced for the Ivorian pop star Serge Beynaud, among others. At the same time she is a performer and played in the plays "The Ambassador", "The International Criminal Court", "Kabuki Noir"" and "Stories from the Vienna Forest" by Gintersdorfer/Klaßen, among others. Since November 2016 she is a member of the dance and theater group LA FLEUR, which works mainly between Germany and France. She is protagonist in the pieces "Pièce d'actualité n°11: Trop d'inspiration dans le 93" "Un truc d'ouf" and "NANA ou est-ce que tu connais le bara" after Émile Zola.

As a qualified actor DAVID KETTERS field of activity includes theatre/film and television. He has worked at the Volkstheater Vienna and in various independent productions (Alma, Last Days of Mankind, etc.) and for various broadcasters such as ORF, ZDF, Servus TV and others. The documentary film on the topic of "dementia", realised together with Marcus Josef Weiss, was awarded the TELEIOS State Prize.

LAU LUKKARILA is a choreographer and performer currently based in Vienna. Lau studied applied theater, acting, contemporary dance, singing and performance at the Metropolia University of Applied Sciences in Helsinki and the Royal School of Performing Arts in Madrid. In 2018, Lau received the BKA's START scholarship for music and performing arts, as well as the danceWEB scholarship at ImPulsTanz. In 2019, Lukkarila presented the solo work Trouble at the Festival Rakete at Tanzquartier Wien.

EVANDRO PEDRONI is a brazilian performer and choreographer based in Vienna. After concluding his studies in the Performance Major Program at SEAD – Salzburg Experimental Academy of Dance (2013) he was a scholarship holder at TanzQuartier Wien (2013/2014). He developed his solo work “In The Eye of The Beholder” as part of Werkstück in TQW (2016) and he has received the START scholarship from the Austrian Federal Chancellery (2016). In 2017 he premiered “S/M – Stage/Made” in collaboration with Claire Lefèvre supported by Huggy Bears Arts Place, Wien Kultur and Brut Wien. He is featured in productions by Martin Nachbar, Oleg Soulimenko, Hubert Lepka, Stella Zannou, Milan Kozanek, Edan Gorlicki, SETanzTheater, Akemi Takeya, Elisabeth Tambwe, Cie. Willi Dorner, La_Trottrier Dance Collective and others.  In 2020 he premiered his work “everything blue” in collaboration the Canadian choreographer Jasmine Ellis, fully funded by the City of Munich. Evandro’s work or collaborations have been showcased in several festivals such as Imagetanz (AT), Freier Tanz Delta VI (DE), PAD – Performance Art Depot (DE), FAKI 18 (HR) and has been supported by Tanzzentrale Nuremberg, Wien Kultur, WUK, Brut Wien, Huggy Bears Arts Place/Wien, Theater Felina-Areal (DE), HochX Theater und Live Art (Munich) and EinTanzHaus (Mannheim).

RIMMA ARIEL EBERT, born in Lugansk/Ukraine is a set- and costume designer currently located in Heidelberg/Germany. She graduated in set- and costume design at the University of Fine Arts in Dresden/Germany and took part in different theatrical and multimedia projects as an assistant and designer herself. As an assistant she worked with Patricia Noworol and Vita Tzykun at New York Live Arts, at Gene Frankel Theatre with the August Strintberg Repertory Theatre and in Schwerin at Mecklenburgisches Staatstheater with Martin Berger, Sarah Katharina-Karl and Esther Bialas. As a designer she staged "Così fan tutte" with Barbara Beyer at Staatsschauspiel Dresden, "Wir sind keine Barbaren'' with Annett Kruschke at Meininger Staatstheater. She worked with Yamille Navarro at HELLERAU Dresden, worked with the filmmaker Ifeatu Nnaobi at Queer B-Cademy at Kampnagel Hamburg. During Corona she was a set designer with the performance collective "Performance Halt" at Ringtheater Berlin and worked as a graphic designer with different associations. She is an active member of the queerjewish association Keshet Deutschland and her next project will be about modern yiddish culture.

URSULA WINTERAUER is a musician, sound designer and label boss. Known from various band projects (including Wealth, Agent Cooper, Ash My Love), the bassist, singer and electronic musician has been active with her solo project Gischt since 2017, in which she lets vehement e-bass riffs collide with noise synthesis and gloomy club sounds. Inspirations from metal, techno and ambient merge here with powerful elegance and precision. Gischt's solo debut IS released on her label Ventil Records. Since 2015, she has been releasing finely selected records from other friends of adventurous-progressive music (including Fauna, Kœnig, Katharina Ernst), who work in fields of tension away from degenerate genre boundaries.

MARTIN SCHWAB was born in Switzerland to a nurse and a taxi driver and grew up in the southern foothills of the Jura. At the age of 21, he came to Vienna to study theatre, where he began working freelance in the theatre in 2000 - initially as an assistant director and stage manager, before becoming a lighting designer. After initially working mainly in the festival sector (Wiener Festwochen, Donaufestival, Klangbogen, etc.), he went on to work in a wide range of fields, from spoken theatre (with Steffen Höld, Eva Hosemann and Harald Posch, among others) and classical music (with the Vienna Boys' Choir, among others) to dance theatre (with Anne Juren and Doris Stelzer, among others) and performance (with Superamas, Elisabeth Tambwe and Nada Productions, among others). Finally, in 2016, he allowed himself to be tied down for a year at the Theater in der Drachengasse. Since November 2017, Martin Schwab has been working at the Vienna Volkstheater, first in the lighting department, and since this season as stage manager, while also working as a freelance lighting designer.

EDUARDO TRIVINO CELY was born in Bogota, Colombia in 1990. He lives and works between Colombia and Austria. Through experimental processes in sound, sculpture and digital media, he intervenes in public space with installations, performances and actions. He explores the value of failure, error, the invisible and the limits of perception. He thus seeks to propose new ways of looking at our natural environment and questioning cultural concepts. With a background in visual arts, he approaches sound in a self-taught way and moves in the experimental field involving materials, concepts, new technologies and parts of the body. His years of working in theatre have led to his artistic work being influenced by set design, acting, props and dialogue.

KATINKA DEECKE is head dramaturge at the Schauspielhaus Zurich. After training in dance, she studied French literature and theatre studies in Paris.

From 2012 to 2015, she was an opera dramaturge at Theater Bremen, after which she went to the Münchner Kammerspiele as a dramaturge. In 2018 she was dramaturg at the Ruhrtriennale. In 2019, she began her work in Zurich.

INDRA JÄGER born in Frankfurt/Main has been living in Vienna since 2000. After studying journalism and communication sciences she co-initiated and directed the art and culture association IM ERSTEN (2012-16).  In her role as artistic director, she has conceived, accompanied and implemented over 100 projects at the interface of visual and performing arts. Through collaboration with artists from various disciplines, follow-up projects have developed in which she works as a freelance curator, dramaturge, production and cooperation partner.

Produced by
Dig Up Productions

Special big thanks to
Monika Gintersdorfer