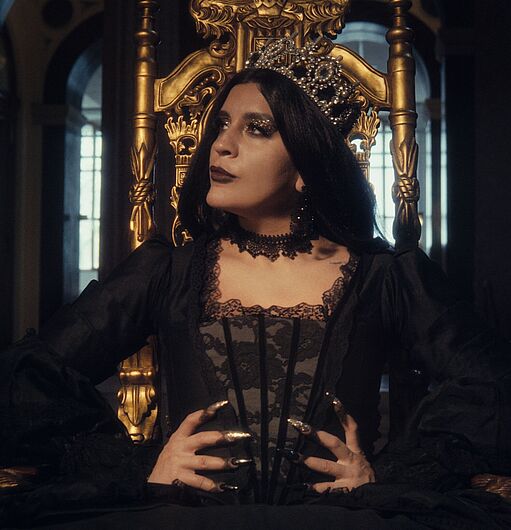 Produktionsleitung und Regieassistenz: Dilan Sengül studied spatial planning at the Technical University in Vienna, as well as acting at the diverCITYLAB Academy. As an actress, she worked in various roles and initiated her own projects. As part of the WIENWOCHE, she worked as a co-organizer, producer and artistic assistant on various projects. She has been working in the Brunnenpassage since 2015. In 2016/2017 she received the scholarship from kuelü gemma! (Program to promote migrant cultural production). As a project employee in the Brunnenpassage, she works at the interface between urban sociology and cultural work. Her focus is on informal participation processes and the mediation of them through artistic methods and practices.

Set und Graphic Designer: Rawan Almukhtar is a visual artist, political activist and was born in Baghdad in 1991. He studied painting at the University of Fine Arts in Baghdad. Shortly before fleeing, Almukhtar explored the theme of confessionalized violence at the Takrib Institute for Contemporary Arts in Baghdad. After fleeing Iraq, new opportunities opened up for him to address political issues more directly and critically. Since 2018, he has been studying drawing at the Academy of Fine Arts in Vienna.  The October Revolution of 2019 marks an important break and a new artistic and thematic direction for Almukhtar. Demands for regime change and the fight against corruption initially also inspired Almukhtar's work and political activism in Vienna. After the murder of 800 demonstrators of the October Revolution in Baghdad in 2020, Almukhtar is currently dealing with the issue of state-sanctioned violence.

Lena Rose is a performance artist from Vienna, Austria. Though acting is her main focus at the moment Rose - deeply inspired from living in cities like New York City, L.A. and Sydney -  aims to defy lables and limitations: She also sings, writes, composes, produces and models to allow her feelings and ideas to be expressed through a variety of mediums.

Lukas Ruziczka - Pronouns : He/Him/His, They/Them/Theirs - grew up in Vienna, Austria and has been living and working in Sydney, Australia, for several years. His performance experiences vary from musical theater and opera, over contemporary dance work through to being a backup dancer for artists on film and TV. So far his dance practice has been heavily shaped by commercial ideas of being, behaving and moving which increasingly repulse him - he now tries to focus on performance artforms that are aligned with his identity, views and morals. Which is why Lukas is very grateful to be part of the KDM squad.

Anna Gaberscik is a performer and writer with a passion for social justice causes. She works and performs at the intersection of arts, culture and academia. On stage and in workshop settings Anna attempts to consistently challenge racist and sexist patriarchal norms and structures. Anna is in the Kiki House of Dive and is known there as Anita Dive. She moved to Vienna from New York City in 2015.

Actor in Video Ya Kelb and Abu G.
Christoph-Lukas Hagenauer