Having lived as ‘others’ in various societies, Mako Ishizuka acquired resilience, parallax and the licence for leaps, which she uses to play with rules, norms and logics, and to ruminate on the findings and questions that surface in the shades of distances.
Developing her ongoing project around the language and cultural translations in the lives of people moving, she turns the spotlight on social manners as a form of reflex and non-verbal communication and as something that reflects culture, moral and mentality. As a threshold to intervene gently into social situations and thoughts, she observes the social actions and manners that are not the object of the gaze, and their diffusion. Through the dialogue and collaboration with those who are deeply conscious about their physicality in the act of communication, she attempts to invent and implement daily social manners that can be »the slow-acting antidote/trigger« to lead to an imagined society.

Mako Ishizuka is resident at KEX Studio from April to June, 2019.

In collaboration with TOKAS

Kunsthalle Exnergasse (KEX) awards grants for artist residencies at KEX Studio since 2012. Mako Ishizuka is resident at KEX Studio from April to June 2019. This is the first exchange programme realised by KEX in collaboration with TOKAS – Tokyo Arts and Space.

KEX: Mako, how did you come to participate in Kunsthalle Exnergasse’s residency programme?

MAKO ISHIZUKA: I was thinking about developing my ongoing project further on several platforms, where each context resonates deeply with the subject in its own way, and where my “foreignness” triggers inspirations and challenges.

One day in Paris I got a 50 Euro cent coin in the change. It bore the image of the Secession, which doesn’t circulate much in France. I took it as an invitation and decided to apply for the opportunity (and then the coin returned “home” with me here).

KEX: Can you please speak a bit about your artistic practice and your project “AFTER-RIPENING & CORRUPTION – PARAPHRASING MANNERS”, which you are currently working on and during the period of your residency in Vienna?

MI: Living in different societies as an “other”, I attempt to intervene into the gaps that emerge at the intersection of the everyday and the world, using my experiences and imagination as a springboard. This takes on various forms, such as installations, acts, relational projects, and essays.

This project revolves around the translations of language and culture in the lives of people on the move. It originates from the experience of struggling to translate an essay that I originally wrote in English into my mother tongue Japanese.

“After-ripening” in German is “Nachreife”, the term Walter Benjamin used to describe translation. “Corruption” is the process of decay, and in linguistics it refers to degradation in language change. I began calling it this way as it suggests an organic quality, and its implications invite various interpretations. It also lets the subject be perceived in a familiar way – projecting bananas, for example.

KEX: What is your specific interest in Viennese/Austrian culture?

MI: In Vienna I conduct an “essay” of this project, reflecting on social manners and gestures as a form of non-verbal communication, and attempt to invent manners that can serve as a slow-acting antidote to lead to an imagined society.

Currently I am intrigued by the sense of the presence and immediacy for my project; I think the rich performance scene as well as the sociopolitical climate in Vienna and Austria will help me to delve into this query.

KEX: From WUK’s courtyard one can see the white drawing and text on the window of KEX Studio, right above the entrance to the concert hall. This is a method you have applied previously in different places, using the window as a screen on the threshold between the primarily private space of production and the public space of exposition. What are your experiences with it, and how was the resonance?

MI: Drawing a map of thoughts is a part of the process of my practice, which I always keep in notebooks.

In social projects I started doing it on windows with mirrored letters to “think publicly” and to address “the other side”.

The reactions vary – glances without eye contact, reading through it, replying with gestures, speaking to me, starting a dialogue. It made me inquire into the performative qualities of my practice.

KEX: Thank you very much for the interview, we are looking forward to see and learn more on June 26, 7.00 pm at KEX Studio. 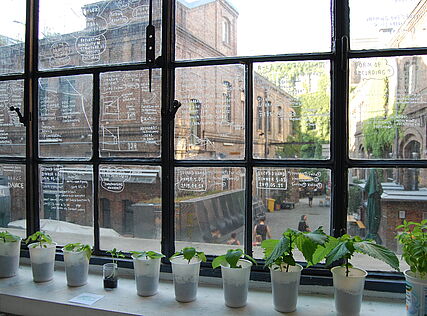 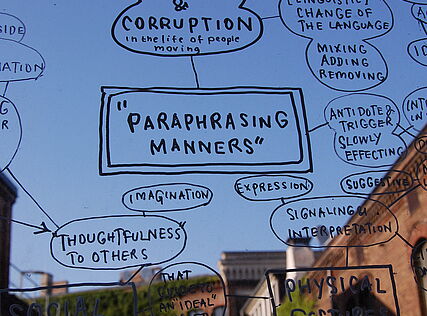 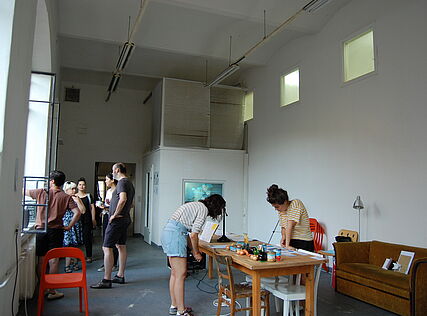 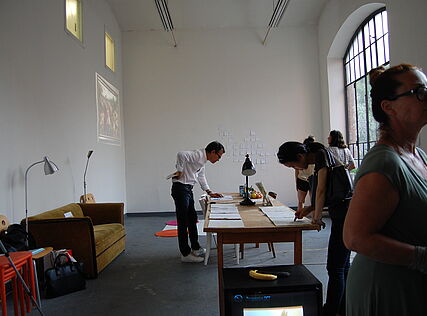 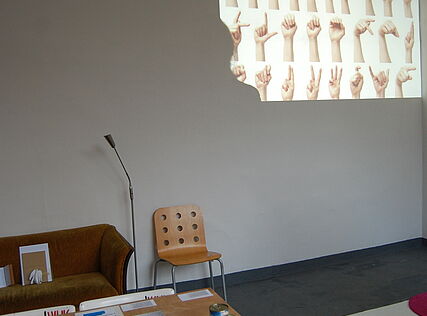 What is Kunsthalle Exnergasse? Information about the space and persons.