Banksy will present a collection of his satirical stencil graffiti pieces, which have amused and shocked city dwellers all over the world for some years, from Bristol to Tokyo, San Francisco to New York, at Kunsthalle Exnergasse. Individual public messages anonymously address all passers-bye, contemporary power relations are wittily parodied. A barrage of CCTV-cameras, barcodes, monkeys, rats, bombs, police men, and stick figures are represented in pointed conflict situations. The direct, deceptively simple images reveal structures of ownership in public space and question them in their cheeky presence. Materials and events during the exhibition will explore (stencil) graffiti, aswell as aspects of political humor, collage and comics in Banksy's work.

His series of text pieces create and reveal ambiguities in the everyday of the urban space. In touristy spots in London the restriction "This is not a Photo Opportunity" is found, signs on bridges alert to trap doors, other pieces are offered to "Cut out and Collect". Legal, governmental and commercial communication, is countered with the personal-public message. Banksy's stencils are thus taking on the authority of official signs, and declare "graffiti walls". In the photo-documentation it becomes evident, that the orders have been followed and that painting has taken place, where permitted. The experiment addresses, like many of Banksy's pieces, issues of obedience and autonomous action.

A central strategy of the complex, ambiguous images is the collage of contradictory elements, recombining most often clichés from the mass media, from art, politics and pop culture, such as the Mona Lisa, Lenin or Pooh the Bear. The resulting contrast, especially between cartoon animals and weapons, is simultaneously grotesque and bittersweet. "I guess my pictures are like taking a photocopy machine down a dark alley and roughing it up," Banksy describes this approach. The pieces focus on specific local situations, such as in a rather violent part of London with "Please Drive-By Carefully" and take on current political events, such as the Queen's Jubilee last year or the Iraq War during the last months.

Banksy also reflects upon the status of his own activity as rebellious art: some of his rats are included in pseudo-action paintings, they seem to have created themselves. He complements idyllic, sentimental oil paintings from flee markets with helicopters. In a recent action he let Che-Guevaras iconic portrait fade on an underground overpass over a market offering Che-paraphernalia, for "people seem to think that if they dress like a revolutionary they don't actually have to behave like one." Ultimately, Banksy sums up: "even if you don't come up with a picture to cure world poverty you can make someone smile while they are having a piss."

Banksy's pieces want to reach the effect of popsongs in terms of their impact and creation of identification. The aim is therefore to circulate the images and texts as much as possible, in books, magazines, in exhibitions, but first and foremost in town and country. Banksy has had exhibitions in London, Hamburg, and Los Angeles, amongst others. He publishes his own series of books, so far "Banging your Head against a Brick Wall" (2001), and "Existencilism" (2002) and was e. g. also represented in "Stencil Graffiti" (Tristan Manco, Thames & Hudson, London 2002). 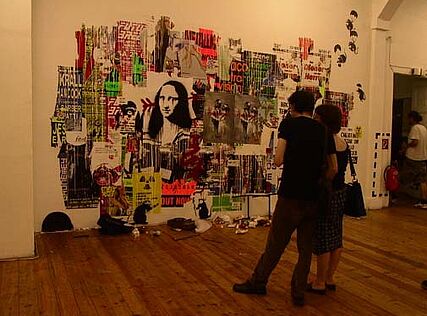 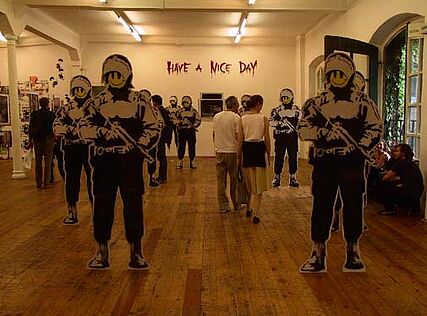 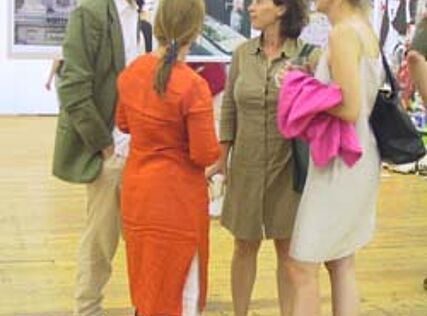 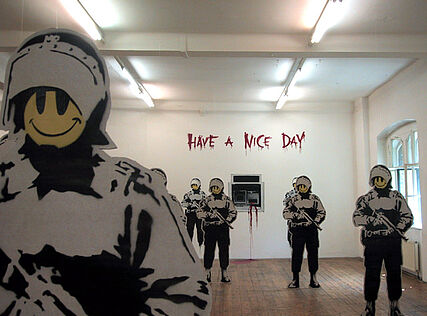 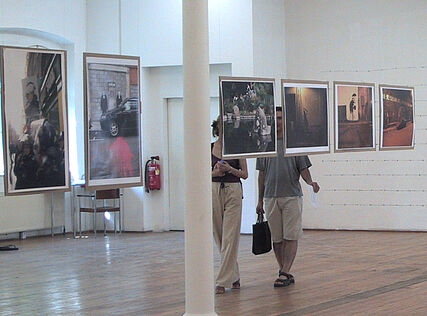 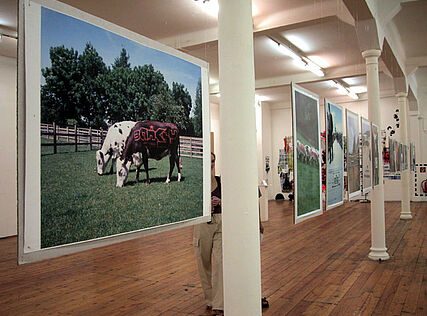 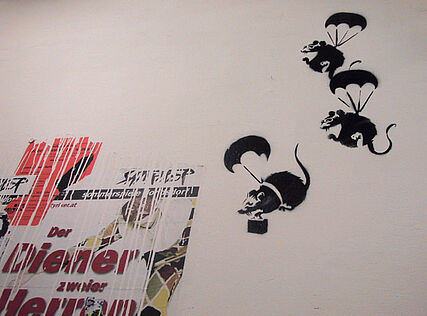 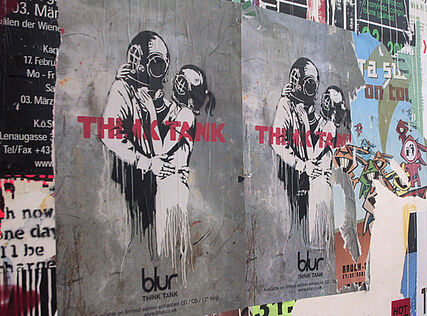 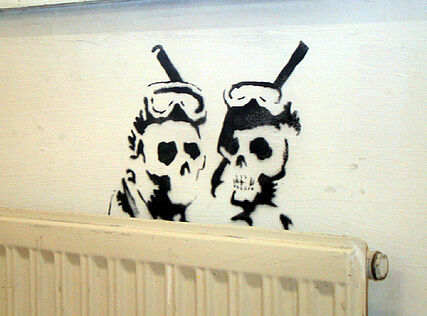