The conception and texts by Richard Gregor<o:p></o:p>

The preview of the exhibition ‘New’ Slovak Art 1936-2001 took place within a series of exchange curatorial exhibitions – transKUNSTHALLE 2001 – in the State Gallery of Banská Bystrica in April 2001. <o:p></o:p>

By the attribute ‘new’ the exhibition points to the art whereby Slovak visual artists respond to the principles of international avant-garde (and post-avant-garde) input in the Slovak environment – in their own methods of approach and output. As avant-garde interventions are primarily more ideational than formal, and moreover, the time of inception plays an important role, the exhibition is not formally homogenous, as when only one style or tendency is surveyed. The phenomena presented here are media in whose ideational or formal bases existential space for shifting the established borders of the visual arts has emerged. The exhibition is divided into several sections. There belongs conceptual art with its later reflection in the techno-world of new media. Another section includes the object, installation, environment and site-specific – functioning towards each other as components and a whole at the same time. The perception and reflection of the body and corporeality in the new Slovak visual arts constitute a significant area, in which, again, different visual methods interlink, with the emphasis on the physicality of interactivity and action. The introductory section of the exhibition raises the most important questions, highlighting crossovers and borderlines, i.e. a model of formal heterogeneity within one tendency. I consider this moment as determining for autonomous viewing our visual arts in the context of world traditions from the period of world modernism onwards. The work of Imrich Weiner Kráľ, presented only by computer print (its borrowing is impossible for technical reasons), is temporally eccentric, but basal. The interlinking of sculpture and painting, in a sense, portends “insufficient” expressive potential of the two oldest techniques in the 20th century. The trend, which continued in the world, was violently disrupted in Slovakia (in Czechoslovakia), and reappeared as a wider movement not sooner than in the early 1960s – therefore quite a large number of works from this and subsequent periods are presented here. <o:p></o:p>

The phenomenon of necessary newness has been perceived as strong until today. The Slovak contemporary visual arts do not necessarily draw only on international art, but also on the domestic tradition, some particular forms of which are revealed in the exhibition for the first time. In this exhibition we mostly present works that have not been displayed so far, have been rarely shown, or a longer period of time has elapsed since their display. Their resurrection is not an end in itself; they allude to a wide range of other issues and groups of authors who have dealt with them. It may be called the guessed values of our visual arts, basically the underground values which, paradoxically, may (and must) be denominated from a distance.<o:p></o:p>

Borderlines and Crossovers. The introductory section of the exhibition articulates several interrelated positions. It is based on the work of Imrich Weiner Kráľ Orava (1936), in which sculpture is combined with a painting background. This crossover of media is central to the exhibition, the other works represent styles and tendencies, in which classic techniques are absent, or are not crucial for their character and significance.<o:p></o:p>

The borderline of the media of expression on the one side, and crossovers within individual art movements on the other, are maintained in individual works, representing wide platforms of subjects and groups of authors: Július Koller opposes the classic picture in an appropriated, purely material manner, non-traditional in our country. The borderline tendency is also represented by a five of artists – Peter Bartoš, Vladimír Popovič, Anton Čierny and Stano Filko – in connection with the new work of Milan Tittel. The fundamental interconnection of the object, installation, environment and site specific, which act as basic components for each other and a whole at the same time, is the common denominator of their works.<o:p></o:p>

Crossover positions, which the exhibition suggests, are introduced by the work of Jozef Jankovič. The object – picture belongs to the informel phase of the artist’s work. However, the realities included in the work refer to assemblage, and moreover, by employing a particular element (which by being identifiable, basically aesthetizes the viewer’s perception), the basic informal principle is negated and a crossover is produced. The similar principle is evoked by the sculptural work of Rudolf Uher, the optical object of Milan Dobeš contrasting with the computer sculptural projection of Matej Gavula and Vladimír Havrilla.<o:p></o:p>

The multiplicity of often opposing integrated phenomena is one of the most important authentic postulates within the works of the Slovak visual arts. It is also perceivable in echoes of international modernism, in which it is reflected most in the polarity of a technique and subject matter. The “New” Art exhibition studies this model in avant-garde positions, where the subject matter is subordinated to the method of innovation, and where the idea and a shift of established borders dominate. <o:p></o:p>

Corporeality, or the reflection of corporeality in art is closely related to the expressiveness of utterance and its typical attribute – a gesture. Like expressiveness, the reflection of corporeality proceeds from a physical to an ideational gesture. In addition to a method, it is above all the effect that changes, and in the new art questions a certainty of the seen (which dominated in expressive paintings), and replaces it with an individual model of communication. A way of manifesting corporeality, if we renounce classic representation, has its support in allegory, ideational provocation or a hint, which is subject to individual decoding against a background of thinking and unique sensory openness. An unambiguous symbolic, or representative explication does not exist, mainly because of its potential incapability of generalizing and a danger arising from the opposite. The first motif, which appeared in the exhibition in this connection, is an essential metaphysical narrative of corporeal intervention in the informel, represented by the work of Marián Čunderlík. A post-conceptual installation by Jana Želibská communicates the feminist content by poetic means of expression, and by contrast, a photo-documentation performance by Anna Daučíková mediates the questioning of gender stereotypes by blurring the borders. The self-mystification platform is the opposite of the previous works; as an organic form in the work of Ilona Németh, so an inorganic form in the work of Milan Adamčiak are intrinsically connected with the authors; they are determined by a degree of inner identification and contentment. Photographs by Peter Janáčik handle the subject by a direct subject-matter provocation, which is freed from the method of a shock by employing certain ambivalent idealization. <o:p></o:p>

Space vs Space. In this section of the exhibition, the defining and adjustment of space is linked with confrontation with an individual, and typologically points to the borderline between appropriation and creation, which is so much characteristic of socially active art. Mlynárčik’s permanent concept of the Argillia kingdom, which he conducted in co-operation with ten other artists, is central here; it is in fact his first, though merely rough presentation in our country. Parallel “observations” of wide and thereby intricately fully graspable Argillia, along with “promotional” posters of the collective actions Symposion and Time I and II are to highlight another way of the viewer‘s participation in a work of art. Realities and the official facts are the results of the adult game process and the accent of poetic refuge in the relevant era. Sikora’s works – maximum individualization (!) by X-ray and objectivization (!) by astronomic constellation counterbalance the aforementioned element of a game; both parts are, however, closely interrelated by an effort at extreme and respectable universalization and some other, more accurate portrayal of an individual’s position and his/her relationship with uninterpreted environment. The conceptual land art of Peter Bartoš poses an essential counterpoint to the aforementioned elements. The concept of a landscape creation, with authorial, systematically developed symbolism is very rare in Slovak art. The glorification of one’s own intervention and the one’s own explication of this intervention is the other, logical side of the problems of this subject, signs of which are necessarily present in the other works on display.<o:p></o:p>

The concept: a starting-point, a mediator and the aim. Two closing sections of the exhibition cover conceptual art from its initial forms to the later intermedia overlaps, which are reflected in the technological platforms of the art of new media, where a concept constitutes a certain common basis. This section includes a range of works, from the first conceptual action of Július Koller – A Glass of Water, through a minimalist “spatial” gesture of Boris Ondreička, to compressions of linear films into a single visual point in the work of Marek Kvetán. The problem of the perception of art by more than one sense acts as an independent, but contextual element here, i.e. its intermedia quality in a work of art itself and in relation to the viewer as well. This quality – emphasis on the sense of touch was recognized by Ľudmila Peterajová in a Cameo of Ester Šimerová, another position is represented by the catalogue to an important exhibition – Polyart Space (curated by Ľubor Kára, 1970) by Ivan Štepán. “Karafón” – a sound object along with a booklet on the exhibition and other instructions for actions and two-dimensional object-pages constitute the catalogue presented. A Three-dimensional Score by Milan Adamčiak is also associated with multi-sensory perception. A typo-raster by the same author, along with an optical analysis of a letter-like visual form in an appropriated sign by Miloš Urbásek and multipla by Stano Filko look interesting, especially in contrast with the classic conceptual principle of the adoration of an idea and the central element of expression – a sign.<o:p></o:p>

New media are chiefly a mediator of concept for the contemporary visual arts. They require the presence of technical equipment and (a technician), express themselves in a linear and plastic manner at the same time, thereby crossing over their classic technical framework    (computer, video, film) from a utilitarian standpoint, especially in post-conceptual phases. A classic Rónai opposition in Obrazobrazovka (Imagescreen) anticipates Kvetán’s work, despite employing classic visual means. The work of Pavlína Čierna indicates the individualizing moment which she follows. The modest installation is a straightforward probe surveying the artist herself and, as the work concluding the exhibition, it refers to some of its other aspects and subjects.<o:p></o:p> 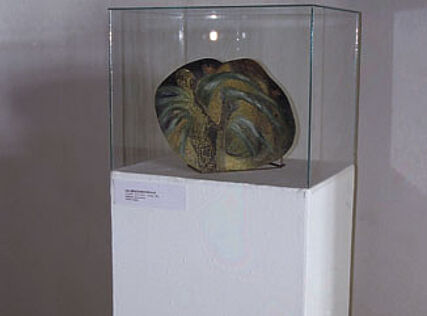 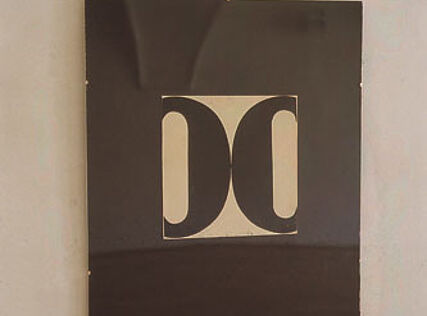 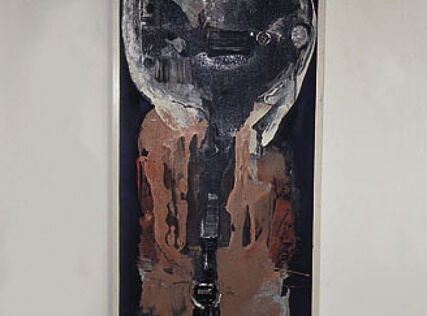